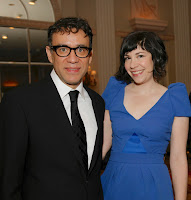 Documentary Now! is one of the best shows on television at the moment, and if you're a fan of Fred Armisen, Bill Hader, or Seth Meyers, you really should check it out. Airing on IFC (home to Armisen's hilarious hipster hit, with Carrie Brownstein, Portlandia) and also available on Netflix, it's a series of 20-minute mini-mockumentaries that parody actual documentaries. In addition to the brilliant "Sandy Passage" (based on the Maysles brothers' 1975 film Grey Gardens) and "The Eye Doesn't Lie" (Errol Morris's 1988 debut documentary The Thin Blue Line), you also have the mock-rock-doc "Gentle and Soft: The Story of the Blue Jean Committee" (which isn't about a real band from the '70s, but more like a type) and "A Town, a Gangster, a Festival" (about a purported place in Iceland where the residents zealously celebrate Al Capone once a year). And speaking of going where it's cold, I also loved "Kunuk Uncovered," which the A.V. Club calls "a fake documentary about the making of a fake documentary that's spoofing Nanook of the North—a 1922 silent documentary that's, well, sort of fake." Don't get faked out by our typo of the day, which was documented 26 times in OhioLINK, and 808 times in WorldCat.

(Fred Armisen and Carrie Brownstein in 2012, at the 71st Annual Peabody Awards Luncheon, held at the Waldorf-Astoria Hotel, in New York, 21 May 2012, from Wikimedia Commons.)