Jesse + Jessie (for Jessie or Jesse) 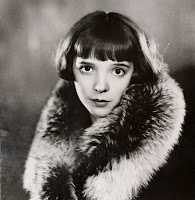 Jessie Matthews was a wildly popular singer, dancer, and cinema star in the U.K. during the 1920s and '30s. Wide-eyed, high-steppin', and determined to get ahead in the theatre, she was apparently more "predator" than ingénue. John Gielgud called her an "enchanting creature," but said that "no man was safe in her presence." Indeed, she managed to snare more than her fair share of bisexual males along the way, in addition to those who were perhaps a bit more easily led. She didn't discriminate against married men and once had her "pornographic" letters to one of them read aloud in divorce court, causing the judge to pronounce her "odious." Another smitten suitor actually committed suicide over her. On the plus side, she was an understudy to Gertrude Lawrence and the first singer to perform Cole Porter's "Let's Do It, Let's Fall in Love." She was cast in almost two dozen films and was often heard and seen on the radio and television, most notably as Wallis Simpson's "Aunt Bessie" Merriman in the 1978 series Edward & Mrs. Simpson. I was lucky enough to catch her on the big screen at my local theater the other night, in the 1936 British musical It's Love Again. Which, it would seem, was pretty much the irrepressible, irresponsible, stage-struck starlet's motto, as she kicked and winked her way through life, men, and the movies. I ran into a former coworker there who told me that Matthews had once put in an appearance at the movie house in England where his father had then worked. She must have made quite an impression. In any event, he seemed pleased to be encountering her again more than half a century later. I double-checked the spelling of this diva's name (she was also dubbed the "Dancing Divinity") as I'm quite sure she would want us to get it right. Today's combination typo (which will undoubtedly return some false hits, so watch your step) was found 141 times in OhioLINK, and 1,338 times in WorldCat.