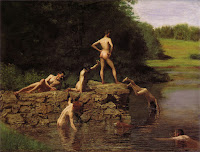 Thomas Eakins was a fin-de-siècle artist from the "realist" school who also hailed from the American birthplace of "liberty": Philadelphia. Eakins enjoyed working with nudes. He would often employ his pupils at the Pennsylvania Academy of the Fine Arts as models, and paint their likenesses from photos. This agreeable practice was brought to an ignominious halt in 1886, however, when Eakins was summarily fired from his teaching post for permitting undraped males to pose in the studious presence of females. His furiously witty and utterly unrepentent response (which I could never do justice to in paraphrase, so I'll quote in its entirety) reads as follows: "My figures at least are not a bunch of clothes with a head and hands sticking out but more nearly resemble the strong living bodies that most pictures show. And in the latter end of a life so spent in study, you at least can imagine that painting is with me a very serious study. That I have but little patience with the false modesty which is the greatest enemy to all figure painting. I see no impropriety in looking at the most beautiful of Nature's works, the naked figure. If there is impropriety, then just where does such impropriety begin? Is it wrong to look at a picture of a naked figure or at a statue? English ladies of the last generation thought so and avoided the statue galleries, but do so no longer. Or is it a question of sex? Should men make only the statues of men to be looked at by men, while the statues of women should be made by women to be looked at by women only? Should the he-painters draw the horses and bulls, and the she-painters like Rosa Bonheur the mares and cows? Must the poor old male body in the dissecting room be mutilated before Miss Prudery can dabble in his guts? ... Such indignities anger me. Can not anyone see into what contemptible inconsistencies such follies all lead? And how dangerous they are? My conscience is clear, and my suffering is past..." Let us clear our own collective conscience and put this typo into the past as well. Phildel* (for Philadel*) was uncovered 24 times in OhioLINK, and 689 times in WorldCat.

(The Swimming Hole, by Thomas Eakins, ca. 1884, from Wikimedia Commons.)