Femenist*, Femenism* (for Feminist* and Feminism*) 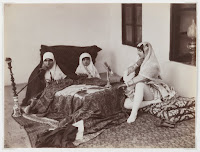 In yet another online "ado" (a very popular crossword puzzle word for what ought to be obvious reasons), it seems that certain people were recently put out by a clue in the New York Times that read: "A decidedly non-feminist women's group." The answer was HAREM. Critics called the whole thing "hateful" and "tone-deaf" and complained that it managed to be "demeaning to both sex workers and women in sex slavery." Which is kind of odd seeing as how most harem members were generally neither "sex workers" nor "sex slaves" in the usual sense. (I wonder what the reaction would have been had the answer involved certain Mormons or other religious adherents of polygyny.) In any case, I suppose it's possible that the word harem itself is some sort of "trigger" for those who have been unduly traumatized by the patriarchy, but other than that, I don't quite see how a harem is not a decidedly non-feminist women's group. But would that be because most concubines didn't actively chosen their roles, or because they did? Another star-crossed crossword couplet for which many readers were demanding their pound of flesh was the clue "Shylock" and its answer: JEW. While I tend to sympathize with this objection since it seems to me just like using any other racial or ethnic slur (which normally wouldn't serve as the sort of necessary "equivalence" a crossword puzzle is aiming for), I might also point out that the American Heritage New Dictionary of Cultural Literacy contains this reference to The Merchant of Venice in a usage note: "'I am a Jew,' says Shylock. 'Hath not a Jew eyes? Hath not a Jew hands, organs, dimensions, senses, affections, passions?'" Other cruciverbalist concerns had to do with calling undocumented aliens ILLEGALS, along with why crossword puzzles often invoke racially coded street slang like HOMIE and HOOD. (Answer: because such words are short and have a lot of vowels, I think. Not because the puzzle makers are secret racists.) Right after chatting about this with a visiting uncle, I happened to pick up an old (July-August 2005) copy of Mental Floss and came across an item entitled "The Secret Lives of Concubines: 3 Reasons Why Harem Life Wasn't That Cool." They were: 1) "The girls didn't dress like strippers" (in fact, they wore "loose, baggy clothing ... more reminiscent of burka than bordello"); 2) "The girls were bored (and sexually frustrated)" since the only men they ever saw were the sultan himself and the eunuch guards; and 3) "It wasn't that exciting for the fellas, either" (it seems that "all the details of harem life—from choosing the girls to breaking up catfights—were overseen by [the sultan's] dear old mum"). Our two typos for today make up a decidedly non-feminist group, appearing seven (and nine) times in OhioLINK, and 113 (128) times in WorldCat.

(Two Ladies and a Child Reposing in the Harem, Antoin Sevruguin, Brooklyn Museum, from Wikimedia Commons.)