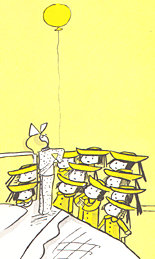 In the 1939 classic children's book Madeline, Ludwig Bemelmans made a sort of pictorial "typo." At the same time that his eponymous heroine is recuperating from an appendectomy in the hospital, "twelve little girls in two straight lines" all still manage to appear at the dinner table. There is a persistent myth that this error was corrected in later editions, but this is probably an attempt to convince book collectors that they possess a rare "uncorrected" volume. As a colleague of mine comments: "I hope they haven't corrected it. It's just the kind of thing that a child (who can count, or had expected an empty chair) would delight in pointing out to an oblivious adult." Oddly enough, an "appendix" is something added to the main body of a work, in addition to something often removed from the body. This flexibility is also reflected in the many different ways that the word can be misspelled. Typographical Errors in Library Databases lists seven variations: Appenddix, Appendex*, Appendii*, Appendx, Appendicx, Appendinx, and Appendox. Ask your doctor if this typo may be right for you.

Carol Reid
Posted by librarytypos at 10:34 AM