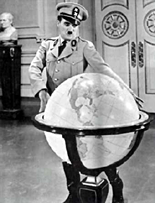 Today is the birthday of Adolf Hitler, who was both Aryan and Ariean (if only arguably an Aryan and actually a Taurean, albeit on the cusp of Aries). His political philosophy has become the basis of neologisms like Islamofascism and his party’s name has been lower-cased in the service of an acute strain of politically correct. Hitler had many minions and has spawned wannabes worldwide, but he was sine qua non among dictators. That reality was neatly reflected in the results I got when I looked for Facism (a “high probability” typo on the Ballard list) in my library’s OPAC. There were 28 hits, but only one for the word fascism. The rest were all misspellings of facsim., i.e., copies of the genuine article. (OhioLINK also shows 24 examples of Facist*.)

(Charlie Chaplin in The Great Dictator, 1940, from Wikimedia Commons.)

Carol Reid
Posted by librarytypos at 5:17 AM

I found one case where Facisme was a typo for Racisme (facism/racism).

I found several examples where "facism" was a typo for "facsim.".