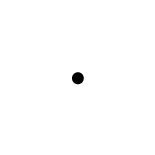 Today’s entry is a period piece. The word period has 15 different meanings (as a noun alone), from the fields of geology, physics, and astronomy, to music, math, and chemistry. Consider that fact, along with how often the word Periodical(s) appears in library records, and you can see why there would be a lot of typos here. My own OPAC had over 100, as does OhioLINK. Typographical Errors in Library Databases (http://tinyurl.com/bc32h) includes Periodc*, Perodical*, Peridic*, Periodicl*, Peridoic*, Peroid*, Peridodic*, Periiodical*, and Perod. The Greek word periodos means “going around, way around, going around in a circle” and eventually gave rise to the Latin perihodos, “a punctuation mark used at the end of a rhetorical period.” In The Dot and the Line: A Romance in Lower Mathematics, the 1963 book by Norman Juster and Academy Award winning cartoon by Chuck Jones, the Line must go to great lengths in order to win the Dot’s heart. Take your trusty list of errors in hand, go forth, and proof your catalog. You’ll be glad you did. Period.

Carol Reid
Posted by librarytypos at 12:04 AM

Would you identify the photos on the typo page? I am curious about them and love to travel.

This typo-of-the-day entry provided a really useful review of the situation in our OPAC with regard to this word. I like it when the blogger-of-the-day lists all recorded variations as well.

Of the pictures on the right margin, the first two are Philadelphia, then Washington, then London, then various locations in New York. These are all selected from my online galleries at www.pbase.com/terryballard, and the subgallery "travel." Thanks!