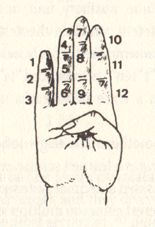 On this most superstitious of Fridays, I'm going to just skip ahead and talk about the fourteenth, the fortieth, forty, and other related words. OhioLINK contains 77 hits on the typo Fourty (making it a candidate for high probability on the Ballard list), as well as six on Fourtieth. It seems that even on forms of four where the U is retained, there is still room for error, as seen in the four examples of Fourteeth and eight of Fourten* found in OhioLINK. How do I love this typo? Let me count the ways ... There are fifty Twelths, five Thirtenths, three Fiftenths, three Sixtenths, one Sevententh, six Eightenths, 19 Ninetenths, and 61 Ninteenths in OhioLINK. I could go on and on, but I'll leave it up to you to take a number and make the corrections in your catalog. There are bound to be a lot of jumbled numbers in library records due to the practice of writing out numerals in the 246 alternate title field, as well as all the items that refer to various centuries (seventeenth, eighteenth, nineteenth, etc.). You can discover common number typos by searching Google, which, incidentally, is itself a misspelling of a number: googol (the figure 1 followed by 100 zeroes).

Carol Reid
Posted by librarytypos at 10:35 AM