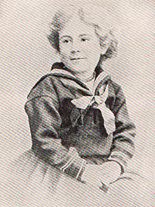 When Daisy Ashford, at age nine, composed The Young Visiters (or, Mr. Salteena's Plan), the book's frequent misspellings were part of its charm. It was so perfectly precocious, in fact, that many readers wrongly supposed it had been written by J.M. Barrie, who had lovingly penned the preface. It also inspired Ring Lardner's short story "The Young Immigrunts," source of that immortal quotation (and title of a 2004 memoir by his granddaughter): Shut up, he explained. Incidentally, most title entries for the Ashford and Lardner works fail to include "sic," which, though technically required, would seem to be a winking nod to the literacy of both these writers and their readers. Vistor* and Revisted are considered "high probability" typos; the following appear elsewhere on the Ballard list: Vist, Visting, Revisting, Revists, Visii*, Vists, and Rivisited. (Note that the word visiter is French for "to visit.")