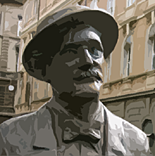 Tomorrow is Bloomsday, when James Joyce fans around the world raise a glass to their opaque auteur. June 16 was the single-day setting for the famously banned book Ulysses, having also been the date of the author's first date with his wife Nora Barnacle. Ulysses was published in the first of many editions in Paris, France, on 2/2/22. And, yes yes yes indeed, the number two seems to be the factor driving most of the typos for this word: Is it one S or two? One E or two? One L or two? OhioLINK turns up two for Ulysees, two for Ulysess, and four for Ullys*. Pardon the French, however, in such proper names as Ulysse (main character in Planet of the Apes), along with other possible foreign-language variations—such as the author Ulyses Petit de Murat. (Illustration is of James Joyce statue in Trieste.)
Carol Reid
Posted by librarytypos at 8:00 AM