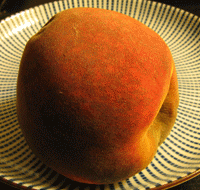 Speech is sort of like writing. It can be formal or a form of verbal phonics. Speech even has its own version of typos—"talkos" if you will. (Just yesterday I heard a talking head on CNN describe someone as "stale wart." Eww.) But you don't need to be able to spell to speak. When giving a speech, speech may be spoken as "speach"; when writing a speech, speech may not be written as "speach." Speech is written as Speach 31 times in OhioLINK and registers in the "high probability" range of the Ballard list. I must speak out in partial defense, though: my own catalog had only three of these and they were all from the seventeenth century (when writing was sort of like speech). Speach can also be a surname (as can Speek). So be sure and watch your "speach" when seeking out this typo. (Escape to freeze peach.)