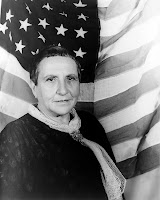 Native Californian and ex-pat Parisian Gertrude Stein once remarked about the city of Oakland: "There's no there there." It wasn't so much her snobbery and trademark repetitive style (though there is that there) as much as it was simple disappointment at being unable to find her childhood home during a return visit to the States. After visiting OhioLINK, I'd like to be able to report that there were no typos for Gertrude there; however, I found twenty instances of Gertude*, making this a typo of "moderate probability." Ms. Stein might be cheered by the fact that three of them were references to her.