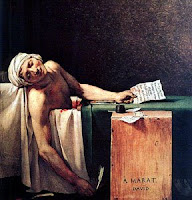 The French Revolution was a turbulent time, full of riots, assassinations, and executions.

In an interesting coincidence, July 27th was of particular significance to two of the Revolution’s most infamous personages.

French revolutionary leader Maximilien Robespierre was overthrown and placed under arrest on July 27, 1794; he was executed the next day.

July 27, 1768 was also the birthday of Charlotte Corday, famous for assassinating the Jacobin leader Jean-Paul Marat. This event (a stabbing in the bathtub) was immortalized in David’s painting The Death of Marat, pictured here.

Turbulan* (a typo for turbulen*) occurs 16 times in OhioLINK, making it an error of high probability on the Ballard list.

(Image from Encyclopedia Britannica online)
Leanne Olson
Posted by librarytypos at 5:00 AM