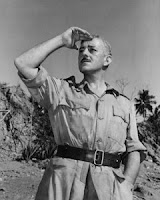 An actor is at his best a kind of unfrocked priest who, for an hour or two, can call on heaven and hell to mesmerize a group of innocents.
– Sir Alec Guinness
Alec Guinness won the Best Actor Oscar for his performance in the 1957 film The Bridge on the River Kwai, and in 1980 won a special Academy Award for his lifelong career of "advancing the art of screen acting through a host of memorable and distinguished performances".

In 1959, he was knighted for his film and theatre achievements, becoming Sir Alec Guinness.

Rumour has it that in some prints of The Bridge on the River Kwai his last name is misspelled as Guiness. This error appears in library catalogues as well: Alec + Guiness is a typo of high probability, with 28 hits in OhioLINK.