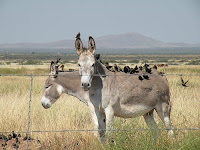 Can too much braying go to one's head? Can one's head truly be up one's ass? Are two heads really better than one? And is a two-headed mule considered symmetrical, asymmetrical, or just a donkey with a difference? The word asymmetrical actually looks more symmetrical with two S's, but that's simply one S too many. It's a fairly common error, though. We found 25 cases of Assym* in OhioLINK on both English and German records. There are many two-headed animal pictures on the Web, most of them involving creative composition generating an optical illusion, or a bit of Photoshopping mischief. Some of them, however, would appear to be shots of genuinely conjoined twins or examples of polycephaly. Separate that extra S from any examples of today's typo you find burrowed in your catalog.