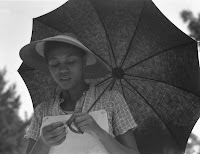 July 2nd is a very auspicious day. For one thing, it marks the midpoint of any "common year" (that is, one that's not a leap year) on the Gregorian calendar. One hundred and eighty-seven days come before it and the same number come after. That fact itself, along with the arresting photo to the right, makes me feel both hopeful and haunted, sunny and cloudy, happy and sad. Is it all downhill from here, or is it possible things may be looking up? On July 2, 1777, Vermont became the first American territory to abolish slavery. On July 2, 1908, Thurgood Marshall, the first African-American on the Supreme Court (and the lawyer who successfully argued the case for Brown v. Board of Education in 1954) was born. On July 2, 1917, the East St. Louis Riot (the worst labor uprising and one of the worst race riots in this country) came to an end. And on July 2, 1964, President Lyndon Johnson signed the Civil Rights Act into law. Racism still exists, but on this halfway-there day, there are many reasons to be glad of our history and to be proud of our fellow Americans, of all races. There were four examples of Rascism in OhioLINK today, and one of Rascist*.