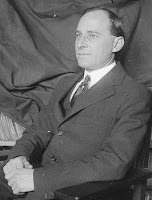 The Antiseptic Baby and the Prophylactic Pup
Were playing in the garden when the Bunny gamboled up;
They looked upon the Creature with a loathing undisguised;—
It wasn't Disinfected and it wasn't Sterilized...

So begins the poem "Strictly Germ-Proof" by Arthur Guiterman. It's a lighthearted spoof on the mania for cleanliness and public hygiene during the late 19th and early 20th centuries, when influenza and other deadly diseases ran rampant. Guiterman was born in Vienna to American parents in 1871. He attended the College of the City of New York and edited the Woman's Home Companion and Literary Digest. He cofounded the Poetry Society of America and served as its president in 1925-26. (Oh, and he once came very close to finding the ever-elusive rhyme for "orange.") In 1915, Guiterman gave an interview to Joyce Kilmer and the New York Times in which he offered a "list of negative commandments for the guidance of aspiring poets." My favorites include: "Don't say 'did go' for 'went,' even if you need an extra syllable"; "Don't write poems about unborn babies [or the Great God Pan]"; and "Don't write what everybody else is writing." If laughter is the best medicine, Arthur Guiterman's inimitable verse was surely a tonic and balm. There were nine cases of Sterliz* (for steriliz*) in OhioLINK today, so before the contagion spreads, let's all scrub up and disinfect our databases.