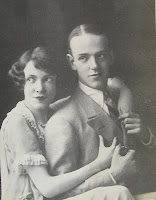 Adele Astaire (born Adele Marie Austerlitz) was born on September 10, 1896. (She died in 1981 at the age of 95). Adele was the older sister and long-time dance partner of Fred Astaire; they performed in theater and vaudeville together for 27 years, starting at the ages of eight and five. Adele was actually the more well-known of the pair during their professional association and was especially well-liked by British royalty. She was even asked by author J.M. Barrie to play Peter Pan onstage, but had to turn the offer down. She was considered to be more outgoing than her relatively shy brother and she enjoyed saying and doing outrageous things. According to Fred's son-in-law, Richard McKenzie, Adele and Fred were playing Scrabble one day when he noticed her laying down the letters C-U-N. Aghast at this "emerging vulgarity," Fred demurred. However, as she later told his daughter Ava: "I could have been spelling anything! Like cunnilingus." And of course she was correct: there are several different words that begin that way (cuneiform, cuneal, cunning, and even the rarely used cunctative, meaning "characterized by delay; tardy; dilatory), though none of them nearly so eye-catching as the infamous "C-word"—which has been around for ages, but which the Scrabble dictionary and many others have pointedly omitted. (At least until fairly recently.) There were seven cases of Astair (for Astaire) in OhioLINK today, and 83 in WorldCat. It's possible some of these may be correctly spelled names (NACO gives one example: Astair Gebremariam Mengesha), so be sure to check your sources.

(Publicity photo of Adele and Fred Astaire, 1919, from Wikimedia Commons.)