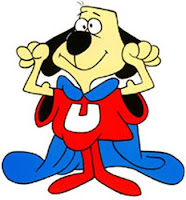 Not all heroes are perfect. Or perhaps I should say, no heroes are perfect. At any rate, I actually prefer mine to be a bit flawed. After all, Achilles would be kind of lame without his famous bum heel. And for a few more contemporary examples: Superman's got that pesky Kryptonite allergy; the Green Lantern is no match for the color yellow; and Wonder Woman is, well, a woman. (Just kidding, nerds! Wonder Woman is perfect.) And then of course there's Underdog, a sort of second-stringer for the savior set. According to this patriotic picture of him in a suit that looks several sizes too big for him, he's only got four fingers with which to make a fist. But then that's pretty much par for the paws. (A dog's digits are sometimes called "toes" and number five in the front and four in the back. And most cartoon characters have four fingers because they're easier to draw that way.) In any case, Underdog's worth is not in his appendages; it's in his attitude: There's no need to fear, Underdog is here! Wally Cox supplied the voice of Underdog in the cartoon series that ran on television from 1964 to 1973. An array of villains regularly tested his mettle, but Underdog's favorite cause was the valient protection of Sweet Polly Purebred. Underdog was rather klutzy as well, often colliding with something as he attempted to land: "Not plane, nor bird, nor even frog. It's just little old me ... [crash!] ... Underdog." Nonplussed by such contretemps, however, he would mildly add: "I am a hero who never fails; I cannot be bothered with such details." We catalogers are different, however, and need to attend to such small matters as typos. Today's is an imperfect version of the word heroic*. There were seven of these found in OhioLINK today, and 95 in WorldCat.