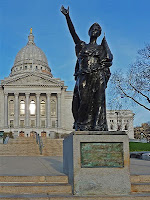 Journalists and grammar experts have been engaging in a rather pointed political debate lately over the Obama camp's minimalist new campaign slogan: "Forward." That's with the period included. "Forward. Period. Full stop"—as the president himself has apparently joked. The stalled buzzword's been getting a bit of flack from both sides of the aisle and for a couple of different reasons: it's wrong because it's an incomplete sentence, or it's right because it's an imperative. Newspaper columnist June Casagrande agrees that there is something slightly off about this slogan, but it may not be what the critics think. She argues that "Forward." is not an imperative nor a declarative sentence (unless you mean to forward an email, for example, and it would still need an object: forward what?), but explains that legitimate sentence "fragments" can and often do end in periods. In any case, she thinks that the period here looks a little odd and out of place. (I see her point. A one-word sentence in a book or article, surrounded by other sentences, needs a period after it, for obvious reasons. But this is more like the door of a restroom reading "Women." or a directional sign saying "Left." or "Right.") Even the sentiment behind it is kind of lame, it seems to me. It's clearly meant to evoke exhortations like "Onward and upward!" but "Forward." just sounds sort of grim and resigned. In any case, it does make you ponder the question of what periods are actually for. (And to wonder, perhaps, what the next one in our own country's history might be like.) I suppose forward is better than backward, though (except for when it isn't), so rather than resign ourselves to 29 examples of Foward* in OhioLINK, and 595 in WorldCat, let's move forward today and try to correct this error.

Note to irony lovers: Casagrande's otherwise excellent column contained a rather unfortunate period-implicated typo of its own: "Because 'Forward.' Is not a complete sentence, it's an error to end it with a period."

( Copy of the figurehead statue "Forward," which was created at the Columbian World Exposition in Chicago in 1893 by artist-in-residence Jean Pond Miner. The title of the statue adopts the motto of the State of Wisconsin, and funding was provided by the women of that state. From Wikimedia Commons.)