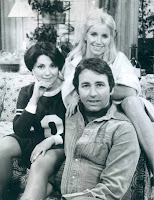 Two's company, three's a crowd. The letter m, much like the best of friends, is basically two n's pushed closer together. A typographical "em dash" (—) is twice the width of an "en dash" (–). And whereas a fish (the glyph for the letter n) might not need a bicycle, it definitely does need water (the glyph for the letter m). The two of 'em fall almost right smack dab in the middle of the "alphabet song" and are arguably the most fun part of it to sing: L-EMENO-P. Speaking of fun, I experienced a couple of funny coincidences while composing this blog entry the other night. With the television on in the background, I heard a character say, just as I wrote the word company: "Is company coming?" And then a minute later, as I was putting down the word best, another suggested that they'll "just have to make the best of it." Let's make the best of our typo for today (found 13 times in OhioLINK and seven times in WorldCat) by cleaning up all of our library catalogs. Company is coming.