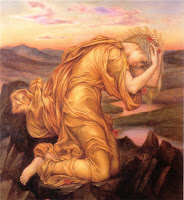 Demeter, sometimes known as Deo, was the goddess of the harvest, according to ancient Greek mythology. She was like the head of the Agriculture Department. Demeter, whose Roman analogue was Ceres, was responsible for the success of the fall crops, especially the grains, and is associated with the poppy flower, which blooms brightly in the barley fields. In Homer's Odyssey, she appears as the one who separates "the wheat from the chaff," as we still say today about a person who can see the true value of things. Her daughter Persephone was famously abducted by Hades and made to stay underground until her grieving mother, who had called a halt to any further fruits and vegetables, got her back with the eventual help of her father, Zeus. It's rather an odd story, but the upshot is that since young Persie had hungrily eaten a pomegranate seed while living in the underworld, she was forever punished by having to spend a third of each year with Hades, and two-thirds of it aboveground with her mom. Despite the fact that Deo is also said to have presided over the "sanctity of marriage," this detail reminds me of the back-and-forth dilemma of many joint-custody children of divorce. I'm kidding of course. The legend of Demeter is clearly intended to represent the growing cycle of the seasons. I hope you've all got your grains harvested by now, or at any rate that you're able to separate the wheat from the chaff when it comes to today's typo, which turns up 11 times in OhioLINK, and 46 times in WorldCat.