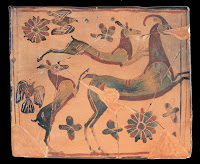 Today is National Grammar Day and to celebrate, the American Society of Copyeditors hosted a haiku-writing contest on Twitter. In an odd coincidence (before any of us realized the import of the date), my supervisor and another coworker were debating whether or not microfiches was an acceptable form of the plural. The latter felt it was sort of akin to deer/deers and fish/fishes. He added that one need only include an s or es when talking about different species of deer, fish, etc., but after doing a little digging, it seems it might be a bit more complicated than that. In any event, and in light of our little talk, my favorite grammar haiku naturally had to be the one that read: One deer, two deer, three, / Haiku is singular and / Are also plural. That is, until I saw: Show us on this doll / Where the copy editor / Punctuated you. As well as: Oh, if I were not / In a rare subjunctive mood, / I would wish I were. Truly, they're all wonderful, and I suggest you try your own hand at writing one. Here's mine: Composing this poem / Comprising only three lines / Points to my pet peeve. There were 13 cases of today's typo found in OhioLINK, and 315 in WorldCat.
(Dedication to Nymphe, protectress of marriage, Google Art Project, from Wikimedia Commons.)