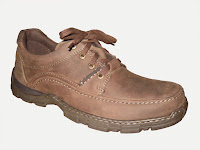 Libraries have long been known for being places of quietude: there's no yelling, shouting, screaming, or braying allowed. (Only an "ass" would say otherwise.) Another hoary stereotype about our profession is that librarians wear "comfortable shoes." So perhaps then the most appropriate footwear for library patrons and workers alike should be Hush Puppies, seemingly named for the relative lack of noise such suede-covered, soft-soled flats make when walked in. Though the actual back-story is more interesting than that. James Gaylord Muir, the brand's first sales manager, was dining with a regional sales rep and asked about the derivation of the word hushpuppies, which are a deep-fried southern delicacy. The man informed him that farmers used to toss these corn balls to the braying hounds in order to "quiet their barking dogs." Since "barking dogs" was also vernacular for sore feet, Muir realized he had suddenly found his brand name! Today's typo (seeing as how I just made it today myself) is one of "highest probability" on the Ballard list, probably in part because it's easy to make, but mainly because the word library appears so often in library records. There were sixteen cases discovered in OhioLINK, and an amazing 1321 in WorldCat.
(Hush Puppies casual leather shoe, 18 January 2010, from Wikimedia Commons.)