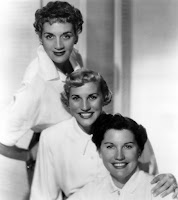 One time I asked my German-speaking grandmother what the phrase Bei mir bist du schön meant. ("My dear Mr. Shane?" a witty coworker later guessed.) She wrote it down on a scrap of paper and said: "It means, 'To me you are beautiful.'" (I still have that lovely memento, which I slipped under the glass of a framed photograph of her.) "Bei Mir Bistu Shein" was a Yiddish song written for the 1932 musical I Would if I Could. When the The Andrews Sisters recorded it in 1937, they used the German spelling, not the transliteration, and sang it in more of a swing fashion, adding English lyrics by Sammy Cahn. The totally catchy, non-kvetchy tune ("Bei mir bist du schön means you're grand!") has been covered in such far-flung places as Sweden, Russia, Brazil, and Nazi Germany (until its Jewish roots were found out and it was hastily made verboten). Even the Shasta soft drink company got in on the act with its jingle beginning "Root beer, Mr. Shane." (Shades of my comical colleague, who, come to think of it, has a similar last name himself! It's also been said that folks would sometimes ask for it by the marvelous mondegreen "My Dear Bits of Shame.") Be sure to search for this beauty in quotation marks, though. Without them, you will get a surfeit of false hits. With them, we got 37 in OhioLINK, and 685 in WorldCat.
(Portrait of the Andrews Sisters, 7 April 1952, from Wikimedia Commons.)