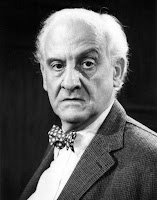 Listen up, class. The following passage, from the 1953 movie The Affairs of Dobie Gillis, is worth taking some time to parse. Dobie Gillis, played by musical actor Bobby Van, has finally registered for his freshman courses at "Grainbelt University," based entirely upon seeing his new crush Pansy (Debbie Reynolds) signing up for them first. The next day they're sitting together in English class when the professor (Hans Conried) stalks in and takes the podium. "My name is Amos Pomfritt," he intones. "The textbook used in this class will be English Usage for College Freshmen, by Amos Pomfritt. When class meets tomorrow, I want everybody to have his copy." He pauses. "You will kindly note that I have said, 'Everybody will have his copy' and not 'Everybody will have their copy.'" Looks meaningly at Dobie: "You, there. What's wrong with saying, 'Everybody will have their copy'?" DG: "Why, nothing. I say it all the time." AP: "My dear young lout, just because you say it, doesn't make it correct!" DG: "Yes, but everybody says it. My family, my friends, everybody I know..." AP, haughtily: "The rules of English usage are made by scholars and learned men, not by college freshmen and other such vulgarians." DG: "Gee, I don't know, sir. I think the way the people use the language is the right way. And if the rule says no, then the rule ought to be changed." AP, almost apoplectic: "In the twenty-five years that I have devoted to this underpaid profession of teaching, I have heard many an asinine outburst. But never one so asinine as yours. I can only assume that your recent passage through puberty has affected your mind. For you, sir, are a presumptuous driveler, a cretinous barbarian, a thick-tongued oaf, and an ill-bred churl. In the future, you will be good enough to keep your mindless opinions to yourself." Dobie to Pansy, sotto voce: "You know, I have a feeling he doesn't like me." The teacher is the grammarian who is also a barbarian here, although Dobie has it only partially correct. I won't describe this zany plot any further, but suffice it to say that these two are not done with the whole prescriptivist-descriptivist debate. There were twenty cases of today's typo in OhioLINK, and 537 in WorldCat.