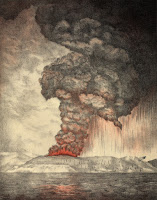 Even when measured against other volcanic eruptions, what occurred on the Indonesian island of Krakatoa on August 27, 1883 was pretty spectacular. After three months of progressively more alarming signs of what was to come—including the release of a twenty-mile-high cloud of ash the day before—Krakatoa suffered four violent eruptions starting early in the morning. The last produced the loudest sound ever recorded on Earth, heard some 3,000 miles away, and more than 36,000 people were killed by the material that rained down from the skies or the resulting tsunamis. Krakatoa all but destroyed itself, too, but beginning in 1927, “Anak Krakatau,” or “Child of Krakatoa,” began to emerge from the caldera and is an active volcano that grows at the rate of approximately five inches per week.

Isand is a low-probability typo with 7 entries in OhioLINK and 230 in WorldCat. A search of the plural Isands retrieves 4 and 64 results, respectively.

(An 1888 lithograph of the eruption of Krakatoa, from Wikimedia Commons)