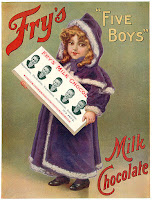 The year 1847 was an excellent one.  Why, you might ask?   Well, that’s when the chocolate bar as we now know it came into existence.  According to the Web site of Cadbury UK, the first ones were produced by Bristol firm Fry & Son using a mixture of cocoa powder, sugar, and melted cocoa butter, thus allowing the chocolate to be molded and shaped.  And these originals were bitter--milk chocolate bars were a later invention that didn’t appear until 1875.  I’m guessing you would not be surprised to learn that Cadbury eventually bought Fry’s (in 1919).


Unlike chocolate, today’s typo Excellant is anything but.  While it appears in the low probability section of the Ballard list, it’s still apparently common enough for my word processing software to autocorrect the misspelling. There are 22 entries in OhioLINK and 193 in WorldCat.

Posted by librarytypos at 3:01 PM