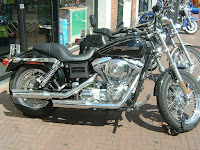 If you ride a motorcycle but are not planning to visit Northwest Arkansas this weekend, then you will really be missing out!  Fayetteville is once again hosting Bikes, Blues & BBQ, an annual event that promoters call the “the largest motorcycle rally in the United States benefiting local charities.”  Last year’s festival drew an estimated 400,000 people, so in addition to the food and fun, the rally will also provide a major economic boost to the region.

It’s still not too late to jump on your Hog and head to the Ozarks for the beautiful weather predicted.  But before you leave, make certain you take care of today’s typo Cyle*,  which can be found 33 times in OhioLINK and 944 times in WorldCat.  Some entries are for proper names and non-English words, so exercise caution.