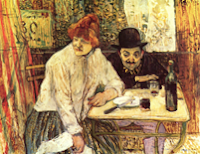 Drinking problems are no laughing matter, but I had to smile wanly at a couple cases of "Alchoholism [sic]" found among the 25 records in OhioLINK openly containing Alchoh*. Given your perspective, that gloss—which can also be rendered as [!]—may appear either humorous (hic!) or sobering (sick). There were 26 cases of Alchol* in our database as well. Somewhat tricky to both spell and pronounce, especially while under the influence, it could be one reason why happy tipplers dislike the word alcoholic, though probably not the main one. (The title of this 1891 self-portrait by Toulouse-Lautrec, A la Mie, is a Fench French play on words. According to proletarian slang, "un mie" is an abbreviation of amie and refers to a woman of the lower classes, most likely a prostitute. From Wikimedia Commons.)