"Worry is the interest paid by those who borrow trouble" according to the father of our country. Washinton is a clear example of the most normal kind of typo to be found in an online catalog - a missing letter at the end of a long and familiar word. This is the third treatment of Washington to appear on this blog, and this one can be found on the A list of Typographical Errors in Library databases at http://faculty.quinnipiac.edu/libraries/tballard/typoscomplete.html, meaning that it was found in more than 100 OHIOLINK records at the time of its discovery. This morning, the count was down to 50. More importantly, there are more than 1000 Washintons in Worldcat. 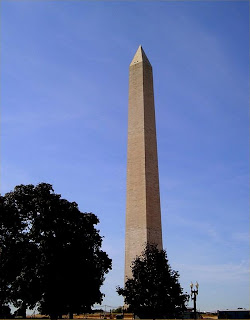 Today's photo is the Washington Monument.
Mark Twain writing in his 1874 novel "The Gilded Age," made the arch observation that by the time the monument was finished, George Washington would be the Grandfather of his country. The full version can be seen at
http://www.pbase.com/terryballard/image/34153758
Posted by librarytypos at 10:56 AM