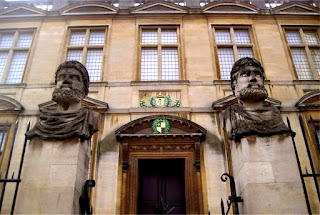 "A university is just a bunch of buildings built around a library" according to the late author Shelby Foote who was, I suspect, speaking at a library conference. Universith is a somewhat unusual typographical error to find in a catalog, but it happens enough that it made the C or moderate probability list in Typographical Errors in Library Databases at http://faculty.quinnipiac.edu/libraries/tballard/typoscomplete.html
That means that it was found in 8-15 records in OHIOLINK at the time of its discovery. We suspect that the initial error occurs due to the proximity of the Y key to the H key on a querty keyboard. The second error happened when the proof-reader missed it. Shelby Foote never had to worry about things like that because his books were all written in longhand. Today's photo shows an ornamental entrance at Oxford University. The full image can be found at http://www.pbase.com/terryballard/image/49490256
Posted by librarytypos at 5:42 AM