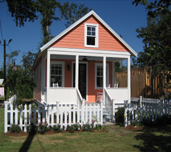 In the summer of 2005, Louisiana got a raw deal from the climate and a lousy one from the government. But as Bob Dylan once said, you don't need a weatherman to know which way the wind blows. Those who cared about Hurricane Katrina figured out long ago that aid to the denizens of New Orleans would have to come from people with agency rather than agencies of the feds. "A dignified alternative to the FEMA trailer," proclaim the makers of the sweet relief abode known as the Katrina Cottage. "Safe and affordable homes designed to be more than shelter, Katrina Cottages build communities." The cottage won the Cooper-Hewitt People's Design Award in 2006. The typo Louisanna was blogged here in December of that year, but variants continue to wreak havoc in our OPACs: Lousiana turns up 104 times in OhioLINK, Louisana 51, and Louisina seven. (Picturesque pic of Katrina Cottage #544, designed by Marianne Cusato.)