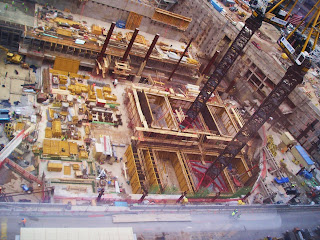 "I installed a skylight in my apartment yesterday. The people who live above me are furious."—Steven Wright. Structual seems to be a simple case of a missing letter near the end of a long word. This is a team effort from the cataloger who probably didn't hit the 'R' hard enough and the proofreader whose mind filled in the missing information. It is found in the 'B' or high probability section of Typographical Errors in Library Databases, meaning that it was found between 16 and 99 times in OhioLINK at the time of its discovery. In Google it was found in a modest quarter million pages. Modest for Google anyway. Checking back in OhioLINK, there were 17 hits for Structual this morning.

Today's photo shows the early work on the Freedom Tower at Ground Zero in lower Manhattan. It was taken last November, and we hear that it hasn't changed much in the last 9 months. By comparison, the Empire State Building was constructed in 14 months. The original shot can be found at http://www.pbase.com/terryballard/image/88365251
Posted by librarytypos at 8:37 AM