"The budget should be balanced. Public debt should be reduced. The arrogance of officialdom should be tempered, and assistance to foreign lands should be curtailed, lest Rome become bankrupt." So wrote Marcus Tullius Cicero in the First Century B.C., in an effort to prove that the more things change, the more they stay the same. Offical is on the A, or high probability, section of Typographical errors in library databases, meaning that the error was found in more than 100 records in OhioLINK at the time of its discovery. This is a case of the all-time classic typo - a missing 'I' near the end of a long word. It brings up more than 11 million web pages in Google. We found more than 1000 hits for the error in COPAC, the British union catalog. By finding it in Australian catalogs we confirmed that the sun never sets on this typo. If your catalog does not contain Offical, then you have found something to brag about.
Today's photo shows the LDS temple in Salt Lake City, the official headquarters for that religion. The original can be found at http://www.pbase.com/terryballard/image/96104394. 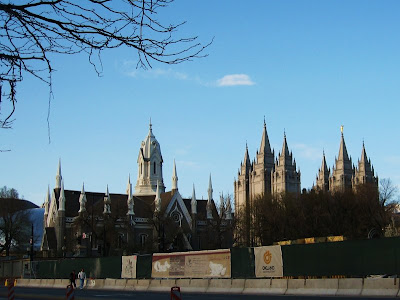 Posted by librarytypos at 5:18 AM