"If more of us valued food and cheer and song above hoarded gold, it would be a merrier world," according to the British writer and educator J.R.R. Tolkien. Indeed. As far as names go, Tolkien can never hope to match Nietzsche or Khrushchev. This inverted-letter typo makes it to the 'D' list in Typographical errors in library databases at http://faculty.quinnipiac.edu/libraries/tballard/typoscomplete.html , meaning that there were at least two but no more than nine hits for the error in OhioLINK at the time of its discovery. Checking back, we found nine hits in OhioLINK this morning. I must add a disclaimer here: as a young science fiction and fantasy reader in the 1960's, I started reading Tolkien 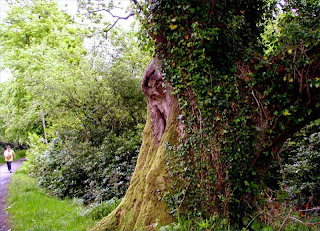 around 1965 when the paperbacks first hit. I enjoyed The Hobbit, but I got hopelessly bogged down somewhere in the second book of the trilogy when I totally lost track of which army was which. Years later I was in the minority as others heaped praise on the movie trilogy. While the books were very Stiff Upper Lip British, the movies looked like an elaborate video game, where giant monsters were lurking behind every rock. Back to the matter at hand, you would be pretty safe in changing any Tolkein in your catalog to Tolkien.
Today's photograph shows a tree in the Killarney forest that may remind you of Tolkien. The original can be seen at http://www.pbase.com/terryballard/image/43816220 .
Posted by librarytypos at 5:07 AM