"A typical vice of American politics is the avoidance of saying anything real on real issues," according to Theodore Roosevelt, who more famously suggested speaking softly and carrying a big stick. The recently discovered typo "Rosevelt" is interesting because all but one of the entries in OhioLINK showed a legitimate spelling. When the word appears on the lists at Typographical errors in library databases , it will be in the 'E,' or very low probability, section. This morning, there were 127 hits for the term in WorldCat, but the vast majority were legitimate. Some of these can appear deceptive, such as the record for "Rosevelt's America," which is a video biography of the Liberian exile Rose 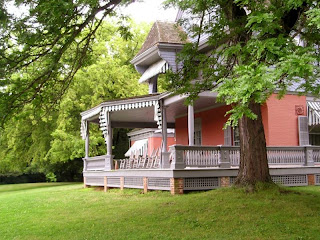 velt Henderson. While this was legitimate, we do note that records containing typographical errors are found to a disproportionate degree in records for audiovisual media.

Today's photograph shows the front porch of Sagamore Hill, Theodore Roosevelt's mansion at Oyster Bay, Long Island. The original can be seen at http://www.pbase.com/terryballard/image/31992987/large
Posted by librarytypos at 5:32 AM