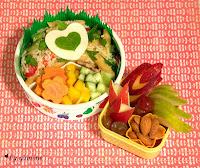 Like company around a dinner table, plants in your vegetable garden will benefit by judicious arrangement. In the 37-year-old book Carrots Love Tomatoes, by Louise Riotte, we learn some interesting things about so-called companion planting. In addition to carrot-tomato mates, it seems that the sweet-smelling rose loves the stinky garlic. Like many human "opposites," deep-rooted plants are attracted to shallow ones, tall ones to short ones, early-season arrivals to late-season laggards. It also appears that basil hits it off with tomato, and not just in a "saucy" sort of way. Plants that are too similar (again, like people) won't always make good matches. For example, you probably shouldn't seat peppers, eggplants, and tomatoes right next to each other. These are all "nightshades" and close proximity will inhibit their growth. Another good book on the subject is 1998's Great Garden Companions by Sally Jean Cunningham, and I'm sure there are others. Wikipedia also has an informative article on companion planting, as well as a long list of happy plant pairs. Conpan* + Compan* comes up three times in OhioLINK and 46 times in WorldCat; Compam* + Compan* five and 59 times. Try searching on the following ones as well: Compam* (17 times in OhioLINK, 176 times in WorldCat) and Conpan* (16 and 172). You're in good company today if you can dig up some examples of these typos in your own library's catalog.

Box of homemade veggie pasta, including cherry tomatoes, asparagus, and mushrooms with parmesan sauce, mozarella-spinach heart, and pepper and cucumber sticks with carrot blossoms, along with a sidecar of plum leaf, pear fan, apple tulips, red seedless grapes, and almonds, from Wikimedia Commons.)