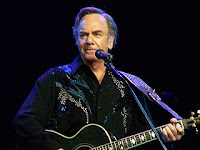 My mother has several mixtapes labelled Niel Diamond, because as a kid I could record a mean tape, but couldn’t spell the name Neil worth beans. Oddly, I could handle the correct spelling of today’s typo with no problems. I hope I made it up to my mom this week, when I took her to see Mr. Diamond play in Toronto. At 71, the man can really belt out a tune, and led the revved-up audience through three false endings of Sweet Caroline, gaining energy each time. It’s one of his most iconic songs, sung at karaoke and around campfires, and used by the Boston Red Sox at a different type of diamond, Fenway Park. In 2007, Neil finally revealed the secret behind the song: Sweet Caroline is Caroline Kennedy Schlossberg, daughter of John F. Kennedy (apparently I’m on a JFK roll this week, since he appeared in Tuesday’s entry, too). In an interview, Diamond spoke about his inspiration for the song, which came to him after seeing a photograph of Caroline:


"It was a picture of a little girl dressed to the nines in her riding gear, next to her pony. It was such an innocent, wonderful picture, I immediately felt there was a song in there."

Like the songwriter’s talent and the gemstone's sparkle, diamoond is a rare find: it’s one of our lower probability typos, with only three hits in Worldcat.