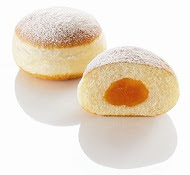 There’s an urban legend that on June 26, 1963, when U.S. President John F. Kennedy said to the people of West Berlin, “Ich bin ein Berliner,” he was actually calling himself a jelly doughnut. Indeed, in Germany, the term Berliner can be used for a delicious jam-filled pastry, but Kennedy’s grammar was no mistake. He’d intended to relate to the 150,000 Berlin people before him and speak out against Communism, declaring that he was proud to be a Berliner, because "all free men, wherever they may live, are citizens of Berlin." Normally, “Ich bin Berliner” (no "ein") is how you’d say “I am a citizen of Berlin,” which is what caused the confusion. But in actuality, near as I can tell (German speakers, care to correct me?) adding the indefinite article “ein” is perfectly appropriate when speaking figuratively, as Kennedy was, since he did not actually hail from Berlin. Subtlety can be important when choosing your words and spellings. Adding an extra N to Kennedy is a low probability typo – most of us are careful with this one. Similarly, my choice of the spelling doughnut over donut, though both are used in Canada, is also intentional – doughnut just looks so much more substantial, making my mouth water in anticipation of the dough and icing (or is it frosting? I’ll take either, thanks!).