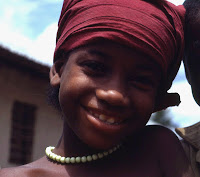 Smile! I used to hate it when people (generally men) would issue that aggressive directive in my direction, thereby often interrupting an otherwise pleasant, if unsmiling, reverie. But the world would probably be a much nicer place if more of us actually did so. Sadly enough, there are relatively few synonyms in the English language for smile (although the word would seem to lend itself to simile). English, after all, is nothing like the absurd Fox News Channel slogan: "Fair & Balanced." Some words have tons of synonyms, while others have hardly any. There appears to be no rhyme (the same thing holds true for words that rhyme) or reason to this. English is a mongrel-like language that randomly borrows from other languages, and nobody is standing at the gate making sure it all stays neat and tidy. Still, I find myself frowning over the dearth of words that mean "a facial expression characterized by an upward curving of the corners of the mouth and indicating pleasure, amusement, or derision." (Maybe this is why the smiley emoticon is so popular... ;-) The thesaurus, in fact, seems to be reaching so far to come up with some that it even includes the questionable laugh and the wonderfully obscure fleer. I'm surprised it doesn't throw caution to the wind and list rictus as well! Other stand-ins for smile, according to a variety of thesauri, are: grimace, grin, smirk, sneer, and simper. They also mention phrases like "look happy," "look amused," "look delighted," etc., which I think pretty much makes my point. Given the looseness of these connections, I'm kind of sorry they didn't add the term duping delight too, which I recently heard used during a TED talk on how to spot a liar as well as some true-crime reportage on television. (It means a creepy, fleeting sort of smile on the part of someone who thinks they've gotten away with a deception.) The only ones that seem to mean something you might want to see coming at you are grin and beam. I was unable to even come up with a decent typo for this word, so we're going to grin and bear it and go with Thesarus* instead: three in OhioLINK and 23 in WorldCat.