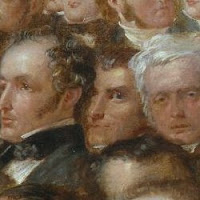 Another typo from the recent Romney collection was "sneak peak" (both misspelled and "randomly hyphenated"), which had snuck into one of his ads on Facebook. Amusing, to be sure, but also kind of understandable, seeing as how there may be a tendency to want to repeat the same vowel combination in the second word that occurs in the first. Sneak peak showed up in OhioLINK ten times, and in WorldCat 405. Contrariwise, Sneek peek (despite the fact that "sneek" isn't really a word) was found twice in OhioLINK and 18 times in WorldCat. Even the utterly confused Sneek peak registered once in the former and seven times in the latter. London tea merchant Richard Peek, in an odd take on nomen est omen (the name is omen, or "true to its name"), is seen peeking out from this gathering of abolitionists. The tea firm Peek Bros and Co. was established circa 1820 and was still operating as Peek Bros. and Winch in 1958. Peek was a prominent philanthropist and abolitionist (in each sense of the word: he reviled both slavery and capital punishment), doing much to promote public health, education, and literacy. He also served as the sheriff of London, during which time he funded missionary work with the inmates of Newgate Prison. And on a rather more whimsical note, he would open his home once a year to serve tea to the local Sunday schools. Take a peek at your own catalog today to see if this typo has managed to sneak into any of your library records.

(Richard Peek at the 1840 World's Anti-Slavery Convention in London. He is in the centre of this extract behind John Sturge, the brother of the organiser. Courtesy of Wikimedia Commons.)