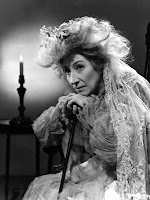 Is "expection" the opposite of inspection? Short answer: No. But it is an example of today's typo, which was found, through close and careful inspection of OhioLINK and WorldCat, 24 times and 369 times respectively. The Charles Dickens classic Great Expectations has been given the movie treatment eight times so far, including a 1917 silent film. Now there's another version on the horizon, starring Jeremy Irvine as Pip, Holliday Grainger as Estella, and Helena Bonham Carter as the permanently jilted Miss Havisham, a sort of would-be Dorian Gray in wedding-dress white. Speaking of expecting, there's also a new book out called Great Expectations: The Sons and Daughters of Charles Dickens, about the rather disappointing offspring of the famous author. I happen to have a much older book at home called Dickens's Children, although in that case it refers to the fictional children in his books, not his actual ones. Published in 1912 by Charles Scribner, it tells of the half-real, half-mythical "London of Dickens," along with the young people who inhabit it, and contains ten beautiful color plates by Jessie Willcox Smith. As an aside, one of the OCLC records found for this title spelled the operative word Dicken's (as opposed to correctly as Dickens's), causing it to appear out of sequence in the catalog. Another surprise included the subject heading: Children with disabilities in literature, which at first seemed a bit too broad, or possibly too narrow, for the likes of Oliver, Pip, David Copperfield, Tiny Tim, Little Nell, and Dombey's son. But considering how many fiction records omit subject headings entirely, I can see where it might be a helpful pointer for a disabled young reader who might have lots of books to play with, but somewhat fewer friends, and hasn't yet been introduced to Mr. Dickens and his children. For another take on this writer you might not expect, check out editor Bernadette Rule's In the Wings: Stories of Forgotten Women, a newly minted anthology about various female figures in the lives of famous men. One of my favorites, "Maiden Aunt" by Richard Van Holst (a fascinating story about Charles Dickens's sister-in-law) is a true exercise in tact.

(Studio portrait of Martita Hunt in the 1946 version of Great Expectations, from Wikimedia Commons.)