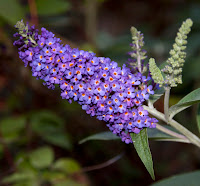 It's sometimes said there's no rhyme for orange, but fellow "secondary color" purple seems to be lacking for one as well, at least according to the poet's little helper website RhymeZone. Older folks will likely remember the 1958 chart-topping novelty song "The Purple People Eater" while demonstrably less silly younger ones probably prefer the formerly known as Prince tune "Purple Rain." (Even more recently minted ones than that must recall, whether they like it or not, being mesmerized by Barney the Purple Dinosaur singing, "I love you, you love me, we're a happy family!") Purple is an often lofty, even regal, sort of color, but it's also a funny-sounding word that seems to lend itself to nonsense. Gelett Burgess (author of the "Goops" series for children, along with the excellent maxim "Love is only chatter; friends are all that matter") wrote this famous little ditty, published in 1895:

I never saw a Purple Cow;
I never hope to See One;
But I can Tell you, Anyhow,
I'd rather See than Be One.

The poem became so popular that Burgess grew exasperated by it and two years later penned the following follow-up called "Confession: and a Portrait Too, Upon a Background That I Rue":

If pot (now legal in eighteen states plus the District of Columbia) were purple, it might look something like this, a flower actually known as "Buddleia." There were two cases of today's perp in OhioLINK (one for purple and one for the French word peuples), and 15 in WorldCat. Smoke 'em out if you got 'em. (But don't quote me.)