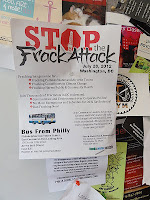 According to the 2010 documentary Gasland by Josh Fox, and the upcoming (?) HBO sequel Gasland 2, if you've got "fracking" going on outside your house, you might want to avoid licking, drinking, or even turning on the water inside it. The film begins with one Colorado homeowner literally lighting fire to the water coming out of his kitchen tap in order to demonstrate the apparent dangers of hydraulic fracturing. Because this method of generating energy allegedly pollutes the water at the same time that it utilizes a great deal of it in the process, and because the ultimate goal here is the extraction of hydrocarbons, some people may think the word in question is "hydrolic." However, it's actually hydraulic, a reference to the forceful pressure needed to release the underground shale gas. It's not only the technique itself that's controversial—it's what to call it, and furthermore, how to spell it. The Wikipedia article reports that this is also known as "induced hydraulic fracturing or hydrofracturing" (which, along with another abbreviation, "hydro-fracking," would seem to go a long way toward explaining today's typo) and is "commonly known as fracing, fraccing, or fracking." There were 13 cases of Hydrolic* (for hydraulic*) in OhioLINK the last time I checked, and 204 in WorldCat.

(Ad on message board in coffee shop for rally against hydraulic fracturing, 17 July 2012, from Wikimedia Commons.)