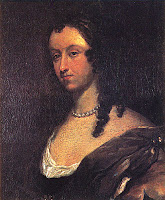 It might be a bit of a stretch (it can often be difficult coming up with decent puns for some of these), but I guess I'm gonna go with the 17th-century writer Aphra Behn today. (Great name, by the way, isn't that? It sounds a little like the first two letters of an imaginary alphabet, or perhaps part of a college sorority: "I'm pledged to Aphra Aphra Behn.") It might be better if today's typo were Noben* rather than Nobem*, but let's try and work with what we've got here. A friend was talking about women novelists throughout history the other day, so I asked him if he knew about Aphra Behn. No, he answered, sounding slightly puzzled. I don't think most people do. While relatively few details are known about her life, it looks as though Behn may have been born in the month of November, since she was apparently baptized Eaffry Johnson on December 14, 1640. Considered the first woman to earn money by writing (along with Delarivier Manley and Eliza Haywood, Behn was one of what was called "the fair triumvirate of wit"), she is best known for her books The Rover, Love-Letters Between a Nobleman and His Sister, and Oroonoko. A fervent Catholic and monarchist, Behn operated as an English spy in the Netherlands and later served time in debtor's prison. Although her life and literature are currently studied in universities, Harold Bloom once called the "resurgent popularity" of Aphra Behn a case of "dumbing down." However, Virginia Woolf claimed that Behn's career, along with her distinction as the first woman novelist, were far more significant than the actual works that she produced. Despite her checkered past and her various friends and foes, Aphra Behn may have summed it up best in the inscription on her tombstone: "Here lies a Proof that Wit can never be / Defence enough against Mortality." There were nine cases of today's typo in OhioLINK this morning, and 433 in WorldCat.