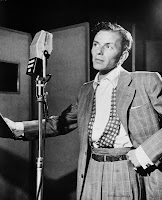 Once upon a time, Frank Sinatra met Dean Martin and decided to give him what for. "You sound like a ferry boat," Frank tells him. "Toot-toot," replies Dean. "I'm not a ferry boat. I'm a very manly sloop!" A very nice example too of simile, punning, and metaphor all wrapped up into one. Actually, this racy reference to male sexuality comes from a 2010 radio broadcast entitled "Frank Sinatra: The Man & the Myth." Much of the Rat Pack's quintessentially fifties humor was rooted in just this kind of campy masculinity. At its core, a sort of winking homophobic/homoerotic joke, it relies on a form of verbal sparring that borders on seduction. The original ensemble was assembled by Humphrey Bogart; after his death in 1957, Sinatra assumed the high-ranking position in what they then preferred to call the "The Summit" or "The Clan." Although this hip group of actor and musician friends seemed to define a certain brand of cool machismo, it had its occasional female members as well (Lauren Bacall, Bogie's girlfriend and the one who first dubbed them the "Rat Pack"; Judy Garland; and Katherine Hepburn) and did not at first include Dean Martin or Sammy Davis Jr., although it did have the urbane David Niven. By the 1960s, however, the leaders of the pack were considered to be Sinatra, Frank, and Davis, who appeared in the signature film Ocean's Eleven, along with Peter Lawford and Joey Bishop. There were 23 cases of today's typo in OhioLINK, and 347 in WorldCat.

(Portrait of Frank Sinatra at Liederkrantz Hall, New York, circa 1947, from Wikimedia Commons.)