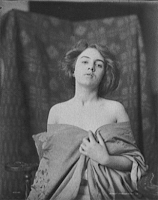 Loosing for losing is a very common typo, it seems. Partly because of the seeming pronunciation and partly because loosing is a real word (meaning "releasing" or "loosening" and often showing up as an antiquated one rather than a contemporary English one). In any case, I got quite a few hits on it, a decent number of which were actual typos. There were 92 cases of Loosing in OhioLINK and "too many records found for your search" in WorldCat. When I combined Loosing + Losing, I got four in OhioLINK and 38 in WorldCat. And when I truncated those terms to Los* + Loos*, I didn't get any in OhioLINK (I think this may be a glitch that occurs there at times when you try and truncate too much or something) and once again, "too many records found..." in WorldCat. I know this is all a little loosey-goosey, but you may want to check it out anyway. Just be careful to consult the original work before you make any corrections. I always thought the reason a woman who was promiscuous or had sex outside of marriage used to be called "loose" was that her morals were supposedly a little flexible. I say "used to be," but these things are horribly slow to change—in the words of Anita Loos, "Fate keeps on happening"—as witnessed by the current spate of "slut shaming." Women back in those days were generally required to be tightly corseted, buttoned, and covered up to a fare-thee-well, which probably is also why the word "loose" has come to refer to women who color outside the lines, as it were. But seeing this picture of a 19th-century model en déshabillé persuades me that "loose hair" was also a signifier of such fallen status. It's like the old stereotype of a (seemingly sexless, old-maid) librarian with her hair wrapped up in a tight bun. However, just like librarians can be sexy, a hair bun can come loose. And our budget-cutting losers in Washington had better watch out or a loose horde of librarians (otherwise known as a "shush") may be loosed on their sorry asses.