Carey + Cary (for Cary or Carey) 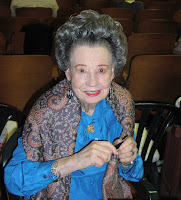 Diana Serra Cary, who for a few brief years in the 1920s was known to the world as Baby Peggy, turns 97 years old tomorrow. (And she still looks as impish and beaming as a babe in arms.) Born Peggy-Jean Montgomery on October 29, 1918, in San Diego, California, she was introduced to acting at the tender age of 19 months. Her father had been a Hollywood stuntman, and while visiting with her mother one day on set, Peggy-Jean managed to impress a director with her overall behavior and demeanor. First paired with "Brownie the Wonder Dog" in 1921's Playmates, she made close to 150 comedy shorts over the next three years, along with dozens of feature films, most notably Captain January in 1924. Most of her films, however, were either lost in a studio fire in 1926, or simply to the ravages of time and human error. She had a tough upbringing, rapidly going from riches to rags, as a result of her father's dissolute mishandling of her earnings, and suffered a lifelong identity crisis stemming from her early role as the family breadwinner. The readjustment required once the parts stopped streaming in at the age of six (after her father had had a falling out with the producer) was intense: the family went from living large on a ranch to camping out in tents. She did a bit of vaudeville, and later made a few "talkies," but was always very wary about the Role that had somehow seemed to replace her life. Highly intelligent, though lacking any real formal education, she went on to have a career as a writer and silent film historian and has published several books. (Montgomery had long ago decided that names like "Peggy or Mitzi" were "showgirl" names and rechristened herself Diana Serra.) Check out TCM's 2012 documentary Baby Peggy: the Elephant in the Room, in which she endearingly acquaints her young granddaughter with her onetime stardom, proving that neither "Baby" nor Diana will be put in a corner—while also suggesting that whimsy, honesty, forgiveness, and a willingness to suffer for, and against, one's art may be the true key to a long and triumphant life. There were 125 occurrences of Cary + Carey (for Carey or Cary) in OhioLINK today, and 1295 in WorldCat.