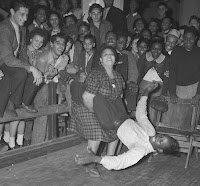 The jitterbug is considered to be a social dance, but it takes quite a bit of skill to pull off properly. It's both sexy and athletic, while still managing to invoke and involve the use of alcohol. It's intoxicating! The word jitter itself is supposedly derived from a spoonerism for "gin and bitters" (i.e., "bin and jitters"). As one avid fan of the form ("a young, white middle-class man from suburban Pittsburgh") put it in 1939: "The hardest thing to learn is the pelvic motion. I suppose I always felt these motions [were] somehow obscene. You have to sway, forwards and backwards, with a controlled hip movement, while your shoulders stay level and your feet glide along the floor...." The jitterbug was created and perfected in the black community, but quickly spread to a wider audience. Cab Calloway's 1934 recording "Call of the Jitter Bug" was, according to the OED, the first time that the term had been seen in print. A song entitled "The Jitterbug" had been written for the movie The Wizard of Oz, but was omitted from the final cut. The number, however, as sung by Judy Garland, can be found on the B-side of the disc release of "Over the Rainbow." Socail* (for social*) turns up twenty times in OhioLINK, and 453 times in WorldCat.